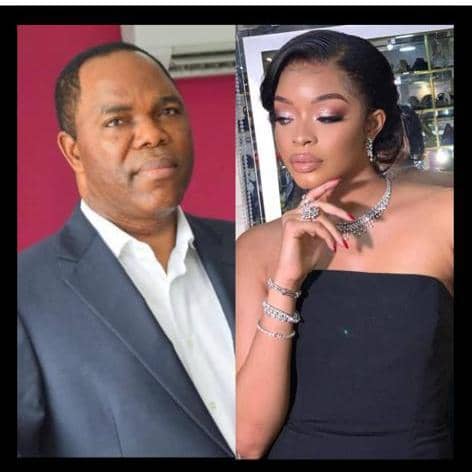 About a week ago, Businessman, Tunde Ayeni issued a strongly worded press statement to debunk the rumour making the rounds linking him to the paternity row involving an Abuja big girl named Adaobi Alagwu.

For weeks now, the FCT rumour mill has been abuzz with the tale of the paternity row, however, in the statement released by Ayeni’s team, Adaobi was described as “Ada yellow and Skinny Ada also known as Bad Bitch Ada has been known to hold a day job of a lawyer and also work as a professional escort to numerous business men within Abuja, Lagos and Port Harcourt, notably men who can help her maintain the fake lifestyle she has been struggling to keep up with in the eyes of the public”.

The statement went on to describe the paternity claim by Ada as “nothing but a wild claim at blackmailing the Billionaire for the sake of getting her hands on some of the Billionaires wealth” and dared “Ada and her family to provide any evidence to prove all of this, but clearly, she and her family are shamelessly on a mission to Slander Mr. Tunde Ayeni, cause him reputational harm and lay claim to his wealth at all cost through the false accusation of paternity”.

Now sources close to Adaobi have opened a can of worms and according to sources familiar with the duo, ‘Ayeni just pretends he is a rich man in billions but all he really does is to struggle for positions with real politicians as he’s currently doing with the Atiku campaign’.

Now in a pregnancy dispute with a 30 year old girl younger than his first and only daughter. The source described Ayeni’s initial statement as a panic move and an attempt to shut Adaobi up because ‘he suddenly realised his folly and the lifetime pain this has brought on his long suffering wife and children. Not only is Adaobi Amam as young as his daughter, she was in fact in the same class as his daughter. He dated and flaunted her openly and with no regard for his family and friends. He gifted his building, right next to a supposedly serious business entity of his (address withheld) to her out of fear he might lose her. He gifted her the house she lives in Lakeview, and purchased a choice property for her mother to live in. This act of his drove his daughter to shame. Whilst his daughter struggles he set up Adaobi’s chambers, gifted her a range rover from his fleet and is constantly at her office even in the full glare of his hardworking staff next block’.

Adaobi is also described by those who know her as ‘so mean, she shouts, abuses all his staff at will and controls their actions’. Ayeni’s relationship with Adaobi is also said to have started when Ayeni broke the unspoken gentleman code with his long time bosom friend, Greg Uanseru. According to reports, Greg it was, who was playing and fiddling with Adaobi before Ayeni ‘snatched’ her from him by outspending Greg and all others.

Describing his many struggles within the political space, Ayeni is said to ‘be battling tooth and nail to secure his place with Atiku so as to be the one monies will be placed with. In the last six years where he has spent most of his time chasing Adaobi his business has suffered. Ayeni has been desperately appearing in all Atikus pictures in order to compromise people and make them believe he is very important in Atikus campaign. An Atiku victory and the possibility of men like Ayeni running the government with him surely spells doom for the nation’.

Let’s not even talk about Jacky of Portharcourt who is another girlfriend and how angry she is about Ada and how many managers have been made to resign just because he continues to mismanage all the affairs. He forces briefs from FETs which is meant to be a serious business on Airbridge chambers embarrassingly. Hr spent so much money renovating her office, pays for her security, its just scary to imagine him in a position to control the country’s resources.

Not resting on her oars, Adaobi and her firm ‘Airbridge Solicitors’, according to close sources, says ‘she’s ready to drag him through the mud if he continues to deny the paternity of her daughter. She says he encouraged her to get pregnant and many witnesses can attest to it that early last year she was a constant regular at his Solween house just as she lived with him in his Rhine street address’.

Ada has also mentioned that many times in the past she had actually walked out of the relationship with Ayeni only for Ayeni to run to her mother and other family members on bended knees to beg.

“Don’t care for people too much in 2023”-Nollywood Actor, Olohuniyo Says