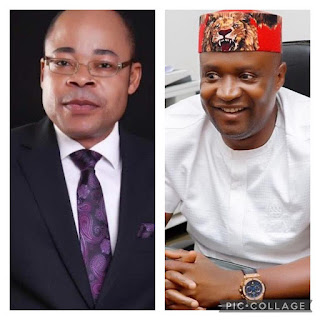 A petition raised by the legal representation of COINOF (Kanu Ogbonnia O & Co.) with reference: KANUCHA/AG/DPPF/MJ/CRMCONSPCOMFELFRECSAMSAP/VOL.1/22 of 10th June 2022 who has gone ahead to petition the Attorney General of the Federation and Minister of Justice, DPPF, the Interim Administrator of the Presidential Amnesty Programme, the Economic and Financial Crimes Commission (EFCC), the National Security Adviser, Department of State Services (DSS) and Commissioner of Police Anti-Fraud Unit, to investigate and bring to book, the culprits and use same as scape goats case to deter other unscrupulous Nigerian citizens or foreigners who may be planning in any way to defraud government in such malevolent manner as exhibited in the present case.

A scam aimed at sabotaging the government of Nigeria and the Niger-Delta people has been uncovered by a whistleblower, as the said scam was perpetuated by a former commissioner in the Ebonyi State government and senatorial candidate for Ebonyi Central Senatorial District, in the just concluded primaries in the state on the platform of the All Progressives Grand Alliance, APGA, SENATOR DR. EMMANUEL UZO ONWE, and CHIEF DANIEL CHIMEZIE OKEKE, the All Progressives Congress, APC candidate for Arochukwu/Ohafia Federal constituency, who doubles as Chairman of Messers Express Concern International Ltd and Swiss Spirit Danag Hotels Port Harcourt, and one MRS UCHENNA ILOMECHIZINE who claimed to be a consultant to the Presidential Amnesty Programme.

The whistleblower revealed that a contract to the tune of N482, 422,500.00 was awarded in line with the Train, Employ and Mentor (TEM) Scheme of the Presidential Amnesty Programme to train 90 Niger-Delta Youths (PAP Beneficiaries) under the Niger-Delta Youths Empowerment Project on Rice, Fish and Poultry Farming for a duration of six months.

The contract was awarded to MESSERS EXPRESS CONCERN INTERNATIONAL LTD based in Port Harcourt, with problems beginning when unusual withdrawals by the culprits to the tune of N148, 634, 690.75 from 3rd and 8th June 2022 (within 4 working days as evidenced from the FCMB project account number: 8705907010) without any proof of dedicating the monies to anything related to the contract delivery (either through communicating or administering the project to expected students for the program or any procurements made), was discovered.

The whistleblower revealed that the said contract was awarded after Senator Dr. Emmanuel Onwe, Chief Okeke and Mrs. Ilomechizine deceived the Presidency Amnesty Programme, convincing the agency that they had fishery, poultry and rice farms for the delivery of the projects with investigations revealing that the farms neither existed nor did the contractors in any way have farms connected to their names or the company used for bidding for the contract.

The entire plan was obviously hatched to maliciously steal money from the federal government and utilize this to fund the political campaign of Senator Dr. Onwe and Chief Okeke, who individually contested and won the primaries of their various constituencies.

Details of the scam have been blown into extensive proportions by a petition by a group known as the Concerned Indigenes of Oil Mineral Producing States Forum (COINOF), precipitating the cancellation of further disbursement of funds for the project by the Presidential Amnesty.

COINOF’s remorse is among other things predicated on realities of lack of developmental projects in the Niger-Delta region revealed by the immediate past Minister of Niger Delta Affairs, Senator Godswill Akpabio through a Forensic Audit Report of the Niger Delta Development Commission (NDDC) that there were over 13,000 abandoned projects within the coastal region.

The petition further laid claims to additional findings by the Budget Office of the Ministry of Finance and National Planning which revealed that over N832.93 billion reportedly released to the Niger-Delta Development Commission (NDDC) from 2001 -2020 across the nine Niger-Delta states had only resulted in a litany of failed projects.

Other cases sighted by COINOF were detailed studies by researchers Chidera Attueyi and Nathan Dim of the University of Salford which showed that development projects worth N15.5 Billion had been unaccounted for in the Niger-Delta as the region lacked amenities mainly related to road construction, provision of water and electricity, construction and rehabilitation of hospitals and school construction, sea embankment, dredging of rivers, and construction of bridges that were either mostly abandoned after laying of foundation, totally abandoned, or poorly done.

The swift restriction of delivery of funds to the said contract by the Presidential Amnesty Programme has been welcomed by both COINOF and indigenes of the Niger-Delta region who have reiterated the reasons of their sufferings as a result of the non-delivery of infrastructural projects due to the activities of unscrupulous people like Senator Dr. Onwe and Chief Daniel Okeke, as COINOF says the growing resentment of the people of the Niger-Delta people against government may after all be as a result of such malicious contractual activities by the Senator Dr Onwe crime ring. It strongly believes the anti-corruption drive of the Buhari administration will handle the case as an important matter within the purview of its policy in this regard.