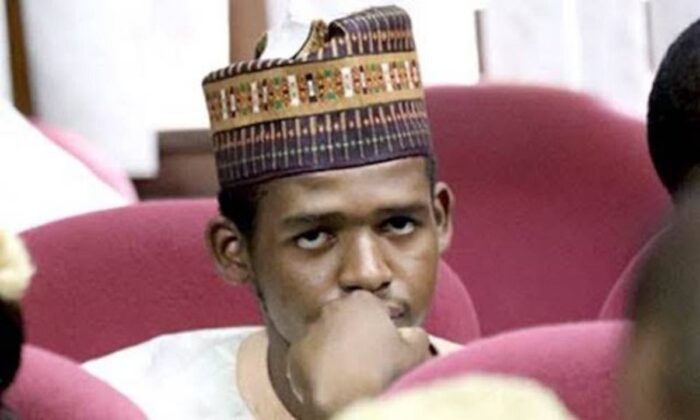 Faisal is the son of a suspected pension thief, Abdulrasheed Maina, who is facing separate N2 billion money laundering charges.
The Federal High Court in Abuja, on Thursday, sentenced Faisal, a son of former chairperson of the defunct Pension Reform Taskforce Team, Abdulrasheed Maina, to 14 years’ imprisonment.
The trial judge, Okon Abang, jailed Faisal after finding him guilty on all the three counts of money laundering involving N58.1million in public funds.
Faisal, whose father is also facing separate set of money laundering charges involving N2billon before the same judge, jumped bail and stopped attending court since last year.
The judge, who revoked the defendant’s bail and ordered his arrest to no avail, ordered the trial to proceed in his absence.
Faisal was absent from court when the judge read the judgement convicting him on all the three counts and sentencing him on Thursday.
The judge jailed him for 14 years on count 2 and for five years on each of counts 1 and 3.
The sentences are to run concurrently, implying that the convict who is believed to have fled from Nigeria, would spend 14 years which is the longest jail terms imposed by the judge in prison.
Mr Abang said the agency proved beyond reasonable doubt that Faisal operated a fictitious bank account with the United Bank for Africa (UBA), through which his father, Mr Maina, laundered the sum of N58.1million.
The court noted that the funds deposited into the account that was operated in the name of Alhaji Faisal Farm 2 were sequentially withdrawn by the convict and his father, between October 2013 and June 2019.
The court held that the anti-corruption agency proved all the essential ingredients of the charge, adding, “The defendant reasonably ought to have known that inflows into the bank account formed proceeds of an unlawful act of corruption by his father (Mr Maina).”
In addition, the court ordered that the 21-year-old Faisal, who had since June 24, 2020, been declared a fugitive after jumping bail, should be arrested anywhere he is found in Nigeria and remanded in any correctional service center to serve his jail term.
The court further held that in the event the convict was traced to anywhere outside the shores of Nigeria, the federal government, “shall legally or lawfully commence extradition process to bring him into the country to serve the jail term.”
The court ordered that the company through which the fund was laundered, Alhaji Faisal Farm 2, be wound up, with funds in it forfeited to the government.
Background
Last February, the EFCC though its prosecuting lawyer, Mohammed Abubakar, told Mr Abang that the convict had fled to the United States (U.S).
Mr Abubakar said EFCC got information that Faisal sneaked to the U.S. through the Republic of Niger.
This development compelled the trial judge, Mr Abang, to order Faisal’s surety, Sani Dan-Galadima, who is a member of the House of Representatives, to forfeit a property used as a bail bond.
Mr Dan-Galadima who represents Kaura-Namoda Federal Constituency of Zamfara, had entered into a N60 million bail bond on behalf of Faisal.
Mr Maina, the convict’s father, also standing trial before the same judge, also jumped bail last year.
Following an order issued by the judge for his arrest, Mr Maina was apprehended in the Republic of Niger, and brought back to Abuja to continue facing his trial in December 2020.
Mr Maina has since remained in prison with his trial continuing in court.

Millions To Be Won As Screen Writing Contest Debuts