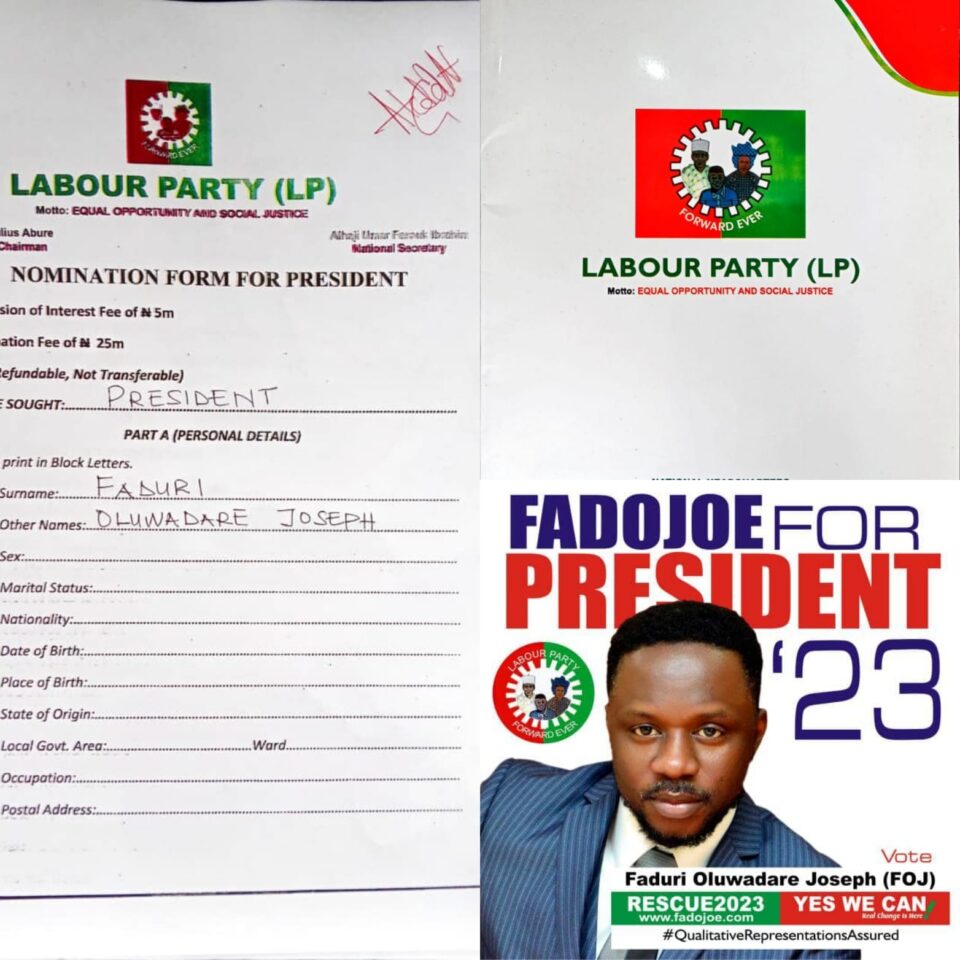 Ahead of the 2023 Presidential elections, United States of America-based Nollywood Actor, Singer and Nurse, Joseph Faduri, aka Fadojoe who recently stated that he has what it takes to become Nigeria’s president, come 2023 has purchased the Labour Party’s nomination forms.

The forms were procured by the F-Planet Foundation boss with the support of his “Rescue Team” for N30 million on Friday 6th May 2022 at Benin City, the Edo State Capital in the presence of party stakeholders and supporters.

Information reaching us claimed that Fadojoe didn’t just acquire the form but also got an automatic ticket as he’s at the moment the sole candidate for Labour Party and the primary election holds in 2 weeks time.

In January 1st 2022, Fadojoe made his declaration where he stated that he maintained that his presidential ambition is anchored on his belief that he can solve the country’s numerous problems.

Speaking on why he is embarking on this path to the Presidency he said, “I am running for president in 2023 to fix the numerous problems in our country, Nigeria. After my graduation, for good 5 years, there was no job, I couldn’t secure a job for myself in Nigeria. In 2007, I relocated to New York City to search for a new and better life and since then, one way or the other I have been coming back to Nigeria because I am into music and I am also an actor, so I need to be around to record my jobs. But I always notice that anytime I come to Nigeria, the country is getting worse than the way I left it. I don’t need to be a politician before I fix the problems in Nigeria. It is just a matter of common sense. All I need to do is change the system that is not working. I am not contesting the presidency because I am hungry or I have no job. I am going there because I want to serve the people of my country.”

Fadojoe also plans to focus on insecurity, kidnapping, electricity, corruption among others which relates to the everyday Nigerian. His determination is of a rare kind and he is relentless to see a New Nigeria. On what would be his priority if he succeeds in his quest to be president, Faduri said, “My first priority would be to fix the problem of unstable and inadequate electricity. That is because any nation that wants to succeed must have constant electricity. Without steady power supply, there cannot be any meaningful development in a nation.”

On how he would support the entertainment industry if he achieved his ambition to be the number one citizen of the country, Fadojoe said, “As entertainers, we offer a lot but get peanuts in return. If I am elected as the president, piracy would be treated like the serious crime it is. If you look at America, if you make a movie or music, you will live on that music or movie for the rest of your life but in Nigeria, you will keep producing movies and music till you die with no achievement to show for it. And the day you stop making music and movies, you will start losing your relevance. Every movie and music you do in Nigeria gets pirated, no loyalty is coming in for you. We don’t have a government that cares about the entertainment industry. If I am elected, I will make sure that piracy is a thing of the past in our country.”